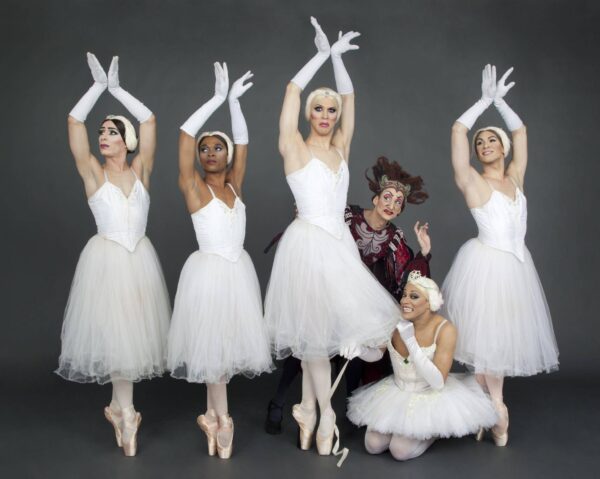 Trailblazing comedy ballet company Les Ballets Trockadero de Monte Carlo started out in 1974 as a New York drag act in the wake of the Stonewall Riots. Nearly 50 years on, The Trocks are known and loved worldwide for their hilarious parodies of the conventions of classical ballet.

Over those years they have shared their signature style and message of equality and inclusion with audiences, providing a stage for dancers often under-represented in ballet, whether that be due to sexual orientation, gender identity, size, class, race or ethnicity.

Now the rest of the world is catching up. As Kevin Garcia, a dancer with the company since 2017, says: “Every time the curtain opens, we represent progress for equality. We just do it dancing”

The company’s 16 extraordinary dancers – who hail from China, Cuba, Italy, Japan, Spain, Switzerland and the US – pair immaculate technique with impeccable comic timing as they take on a kaleidoscope of roles, both male and female. Each dancer has their own performer alter egos including Olga Supphozova, Jacques D’Aniels, Holly Dey-Abroad, Minnie Van Driver, Timur Legupski and Ludmila Beaulemova.

The tour programme, which will be performed in Brighton, includes Le Lac des Cygnes (Swan Lake Act II); Vivaldi Suite; and Raymonda’s Wedding, the traditionally confusing divertissements from the final act of Raymonda which has baffled audiences since its premiere at the Mariinsky Theatre in 1898. The Trocks ignore all the plot intrigues and go straight for the happy ending.

Arts Komedia to host MindOut for the Laughs on Wednesday, August 3