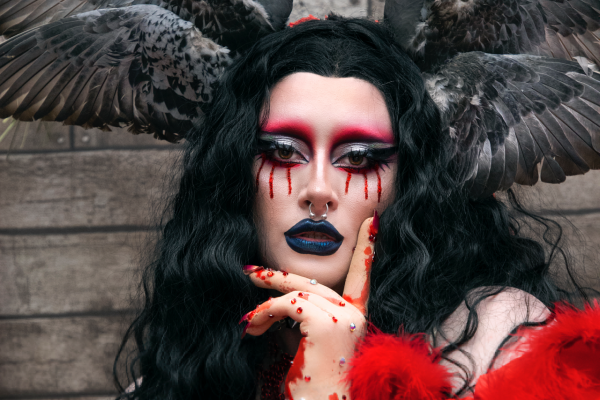 Amber Cadaverous is an international visual artist, based in Birmingham, who specialises in drag performance as well as photography and film. She has travelled the world with her drag, performing in Rhode Island, Chicago, Milwaukee, as well as up and down the UK.

Amber explains that her drag persona is an extension of herself, describing her as “a goth brat diva, a primadonna girl of the underworld. She embodies the juxtaposition between overt, camp, feminine aesthetics – cute bows, pink lingerie, everything that screams ‘girl’ – and rot, bugs, horror and punk. I want to be adored and disgust you at the same time!

“In drag, I’m really drawn to female characters in horror movies. There’s a power and an ‘otherness’ encapsulated in the hyperfemininity of the characters of the horror genre that really resonates with me. With my drag, I want to focus on that otherness and femme power I embody, and harness it.”

Amber also describes herself as a drag witch, a term that came from “the OG drag witch”, her drag mother, China. “Drag for me is almost spiritual,” Amber explains. “It can be like therapy, the art itself is very healing. Doing drag is much like witchcraft, there is an inherent otherness that comes with being queer that makes witches so relatable. Drag is

“Drag is much like witchcraft, there’s an inherent otherness that comes with being queer that makes witches so relatable”

like magic, with the transformative properties, and with drag you cultivate, you make crafts, you create from nothing. Being a drag witch to me is being an alternative drag creature that deviates from the norm and having a very tactile hands-on relationship with my craft and with my community, being very nurturing and making things from scratch.”

Amber admits that her favourite witches from pop culture are The Hex Girls, from Scooby-Doo; “When I was younger they were everything I wanted to be. My mom never lets me forget I would dress up as Thorn year-round and tell the other kids’ parents that I wasn’t a witch I was a Wiccan, quoting the movie. They are my favourite because even now as an adult I think they are absolutely iconic!”

“I will never stop being vocal about the struggles of misogyny, racism, transphobia faced both internally in the community and in the wider world…”

Amber started doing drag at the age of 16/17, experimenting with make-up, wigs, and corseting in her bedroom. During a college art course, her research led her into the world of drag queens and club kids of the 1980s/90s New York, and she “fell in love with the visuals of the club scene and ballroom culture”.

“To me, going into drag artistry felt like a really natural progression, because I’ve always been an artist and have always had a more extreme look in the way I choose to express myself with clothing and makeup, so it always just felt really right and where I was meant to be.”

Seven years later, make-up is still Amber’s favourite aspect of drag. “I love painting for the back row and curating a look so much, fine detailing, stones, props, one-of-a-kind creations, custom work, I just love it.

“I love to create numbers around horror movies especially. Some of my favourite characters to drag up as include Tiffany (Bride of Chucky), Beetlejuice, The Corpse Bride and Samara from The Ring. I love bringing these characters to life with that added element of queerness and glamour.”

In her performances, Amber likes to mix together horror, glamour, and comedy, and she reminisces on one of her favourite numbers from a tour with Adore Delano.

“I specifically curated a girl-power mix that celebrated women and poked fun at misogyny we face even within our own community,” Amber says. “The number was a call out to misogyny in RuPaul’s Drag Race and society, which combined girl-power anthems with quotes including Kennedy Davenport’s Fuck My Drag.”

After the number, Amber took the opportunity to take the mic and address an audience of predominately teenage girls, telling them that they were the only ones stopping themselves from doing drag. “Drag is for everyone and we all deserve to take up space and be respected in our own community,” Amber declared.

Two years later, Amber still gets messages from people who have finally given themselves permission to do drag. “So many people said they’d never seen a woman in drag before to even know it was possible that they could too.

“Representation is so important. It doesn’t always make me the most popular but I will never stop being vocal about the struggles of misogyny, racism, transphobia faced both internally in the community and in the wider world… Seeing other artists and young queer people inspired to make art and start their own journeys because of seeing me do my thing and stand up for us and take up space makes me fall back in love with it all over again. It feels like I’m doing something right and that the misogyny I faced so frequently when I was younger was worth it.”

When Amber first hit the drag scene, she was one of only two female drag queens in Birmingham, which unfortunately came with misogyny and difficulties. She explains that it’s been rewarding to be one of the artists who’s helped shaped today’s scene. “Lacey Lou and I paved the way for that change and fought hard to change misogynistic views, and if I am proud of anything, it’s helping to shape the scene and encourage that growth. We really both stood our ground and didn’t allow ourselves to be pushed out or bullied, even when we had to put up with a lot of sexual harassment and mansplaining in our spaces.”

Starting DragPunk, a group currently consisting of Amber, Lilith, Tacky, Suzi Looz, Melancholy, Glitter King, and Effy Raine, “really changed the alt drag scene in Birmingham and made the first all-alternative queer shows. My main goal personally with Dragpunk was to create safe spaces for people like me, the party I wish existed for me to go to. When I first went out on the scene there was nowhere really that was both emo/goth and queer-owned to party at and we changed that.

“In alt drag, we have carved out a space for ourselves, a space that doesn’t have rules and you don’t have to be pretty. It’s very freeing to be able to exist in this space.”

Touring as a drag collective with Adore Delano put them on the map outside Birmingham but it’s not just the performances that are an integral part of the group. “Being part of a chosen family like this is invaluable truly, I don’t know what I would do without these angels,” Amber says. “I think everyone should have this kind of relationship, queer family is so important. Things are so much easier when you’ve found your tribe, it’s so comforting to know that whatever I do I’m never alone or unsupported.”

You can see Amber Cadaverous and DragPunk at a variety of shows. Check their socials for dates and times.

Amber also recently got engaged to her soulmate, Steph (@the_Craft_MUA) so alongside organising tours, shows, and art projects, she will be busy planning a wedding. “I have the biggest aspirations for us as a couple, we are both so artistic and driven and nothing feels impossible together.”