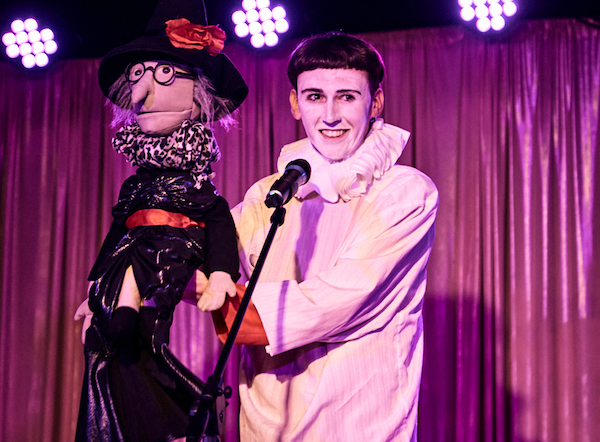 Horror, hilarity and astounding vocal tricks hit the seaside this spring as Lachlan Werner, comedy’s poof prince of puppets, brings his solo show to Brighton Fringe at The Rotunda Theatre: Squeak in Regency Square in May and June. Winner of the Culture Connex x Brighton & Hove Pride Bursary, Voices Of Evil is an hour of ventriloquism like you’ve never seen before. Expect The Muppets meets The Exorcist…

Voices Of Evil is a cartoonish hour where we meet Brew (a small squishy, ego-centric witch puppet) and her friend, Lachy (a ‘poof’, apparently a virgin and for some reason dressed like a choir boy). Together, they invite you to their occult ritual. But when Brew’s gimmicks release a sinister entity with a lust for destruction, the innocent Lachy will never be the same. The show has been thrilling London audiences since initial work-in-progress shows last summer, and made a bloody splash with a sold out run at The Pleasance for London Horror Festival, October 2021.

Lachlan says he made the show because “everyone thinks ventriloquists are creepy anyway, someone might as well make a horror show with it” He says, however, not to be too afraid – “it’s really silly. Like a Simpsons Halloween Special but with one skinny boy doing all the voices.”

But silly as it is, Lachlan “can’t wait to do it again. I get to play with ventriloquism and physical comedy in a way that feels so new. Plus I’m almost naked for, like, half the show. If that doesn’t get you there I don’t know what will.

“I love Brighton Fringe, I’ve been coming every year since I was 17, and I can’t wait to bring this evil queer puppet show to where it belongs!”