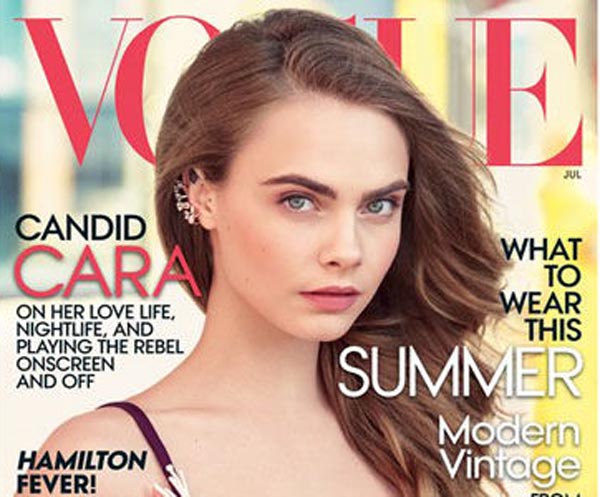 More than 10,000 people have signed a Care2 petition demanding that Vogue Magazine apologise for publishing harmful stereotypes about bisexual women.

In their July 2015 issue, Vogue interviewed English model, actress and singer Cara Delevingne. During the interview she revealed that she is in a committed same-sex relationship with musician Annie Clark (also known by her stage name, St. Vincent.)

In response to the interview, more than 10,000 people have signed a Care2 petition demanding an apology from Vogues Editor-in-Chief, Anna Wintour for publishing the piece.

The petition takes the article’s writer. Rob Haskell, to task for characterising Delevingne’s relationship with women as a ‘phase’ – a harmful LGBTQ stereotype.

Haskell writes: “Her parents seem to think girls are just a phase for Cara, and they may be correct… When I suggest to Cara that to trust a man, she might have to revise an old and stubborn idea of hers – that women are perennially troubled and therefore only women will accept her – her smile concedes the point.”

Julie Rodriguez, author of the Care2 petition, says that it’s wrong of Haskell to equate same-sex relationships with childhood trauma or to characterise them as a phase.

Julie writes: “The idea that queer women only form relationships with other women as a result of childhood trauma is a harmful (and false) stereotype, that lesbian and bisexual women have been combating for decades.

“How could Vogue’s editorial staff green light this article and publish it without anyone raising concerns about this dismissive and demeaning language?”

Many of those who have signed the petition have added comments along with their signatures:

“Dear Vogue, I have been in a queer ‘phase’ for the entire 50 years of my life. I think it is much more than a phase for millions of us. And I would have thought that you would know better than to perpetuate such dismissive, demeaning, and harmful stereotypes. I am deeply disappointed and believe a full, prominent apology is the very least that you can do for your readership.” – James Ferguson, NY

“My daughter is gay and it is NOT a phase; it is an integral part of who she is and I love and accept her, for who she is! – Robert Wallace, CA

“As a longtime subscriber to Vogue, I am very disappointed in the lack of empathy and care that Rob Haskell shows in his interview with Cara Delevingne. Surely Mr. Haskell is a better listener, interviewer, and writer than this piece of his demonstrates. Vogue has made efforts to support the LGBT community; however, allowing this article to go to print makes me question how sincere this support is on their behalf. Vogue, please apologise for publishing such a careless and offensive piece in your pages. Thank you.” – Michelle Sorensen, TN