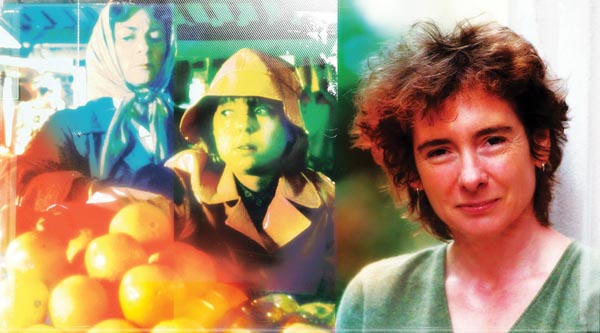 In The Age of Oranges, or The Fruit of Truth. By Craig Hanlon-Smith @craigscontinuum

IT took many years for me to appreciate the game changing LGBT+ artists of my youth. Thirty-five years ago I would have been terrified to associate myself with openly gay popular music performers for fear of a correct assumption that I was leaning that way too. When I think now of Jimmy Somerville, Bronski Beat and their 1984 album Age of Consent, emblazoned with the pink triangle symbol of gay oppression, imprisonment, torture and death, I appreciate how brave and progressive that was for artists at that time.

I would like to think that listening to a collection of songs, including Why?, It Ain’t Necessarily So, I Feel Love, Need a Man Blues, and of course Smalltown Boy, although screamingly obvious to me now was the beginning of a complex, challenging and difficult but ultimately rewarding life journey. But if Bronski Beat’s Age of Consent was a surreptitious and discreet coaxing, Oranges Are Not the Only Fruit by Jeannette Winterson was both an electric shock and slap around my secretive gay face.

In January 1990 I wasn’t aware of the novel published five years earlier, it was the television adaptation, with the screenplay written by the original author, that grabbed my attention as a hand around the throat.

I watched the unfolding drama of young gay love with an intense curiosity I was unable to speak of for myself. These two young women, nay girls, who writhed naked upon the parlour carpet of an unremarkable house not five miles away from my own family home.

I felt sick with fear at the torturous actions of the Pentecostal community who upon discovery of such wickedness tied the lovers up in ropes and subjected them to religious exorcisms. I hated the pretty girlfriend who ultimately betrays our young protagonist and returns to her expected and acceptable behaviours, but was filled with enthusiasm and quiet cheering support for our hero Jess, Jeanette in the novel renamed for TV, who spat and kicked and screamed at her elders in a bid to simply be who she was.

Growing up in small town east Lancashire, a stone’s throw from where Oranges was set, this television adaption sent a tidal wave of shock, awe and outrage through local communities. At school there were people who claimed to know people who knew people who claimed to know people who knew Jeanette Winterson or her family. There were students and teachers alike gossiply informing all who would listen that it was a true story, and in equal numbers those angrily claiming it nonsense and lies, but I was weeks away from an 18th birthday and quietly becoming a suspicious and clever little s***. I knew it was true.

On the international stage the Eastern European political system was collapsing, the Berlin Wall had been demolished by hand (!) and live on television, and I had a father who sat me down in front of such broadcasts stating, ‘Watch this, it’s history, you’ll never see the like again’. But I was more interested in what was happening locally and close to my heart.

A few years earlier in Burnley where I lived, a gay male drama teacher had been prosecuted for having a sexual encounter with two male teenagers, 16 and 18, at the local youth theatre. Although he denied the claims these were hysterical times for gay people and, as the age of consent was then 21 and he was thought to have abused his position, he was convicted and imprisoned ultimately in solitary confinement for his own safety. Eighteen months into his sentence the conviction was overturned as his accusers admitted they had invented the story. A life ruined and the teenage boys faced limited consequences. This bothered me greatly, and in context I now watched Oranges Are Not the Only Fruit as if a fly on the wall exposé upon the plight of gay people in an increasingly manipulative and dishonest society. They were all at it.

I had also, in naivety, not even considered the existence of lesbians, they were quite simply not in my frame of reference but now saw that like me there were girls who were yearning, wishing, desiring and in some cases doing with their own kind everything I longed to do with another young man just like me.

I longed to read the novel of Oranges and would look at its spine on the library shelves but never have the courage to book it out. I planned to move to London in October to attend university and so promised to myself that I would read it then. I read in my father’s newspaper that the president of the Students’ Union of Goldsmiths College was a militant lesbian and although Goldsmiths wasn’t on my original list of possible choices, it soon was and became the only institution that offered me an interview, and then place to study. It was my ticket out and to the truth.

And so Jeanette Winterson is one of my lesbian icons and definitely my first. Oranges Are Not the Only Fruit is a semi-autobiographical novel and does recount some of her own early life experiences at the hands of an East Lancashire Pentecostal community. And, I thank Jeanette Winterson for writing it at a time when it was not cool to be gay, for speaking the truth of love and same-sex desire but also for exposing those who oppress and want hide our ability to become someone.

I want to thank her for her belief in herself, her inner truth and for those dark times persevering and getting up every day, but most of all for sharing with the world these stories. They help and support everyone.

“I have never understood why straight fiction is supposed to be for everyone, but anything with a gay character or that includes gay experience is only for queers.” Jeanette Winterson.