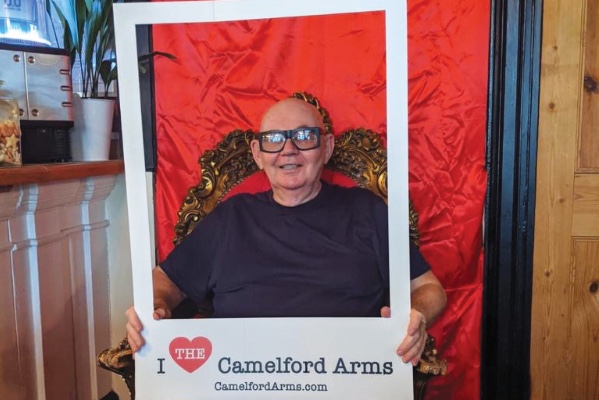 The life and achievements of Michael James.

Michael James has lived the kind of life that would be a screenwriter’s dream plot. An active member of the Gay Liberation Front in the 1970s he was regularly under surveillance by special branch. A former London department store window dresser, he has lived through every social and legal development for our LGBT communities. He has been arrested and served time in prison twice once for some considerable time, and now aged 79 he is published author. As GScene celebrates LGBT History Month with its literary focused theme in 2020, Craig Hanlon-Smith spent some time with Michael discussing his colourful past and how now with the publication of his first novel The Triple Goddess, approaching his ninth decade on the planet he continues to make history.

I visit Michael in his almost top floor apartment in a Kemptown tower-block. From the living room terrace looking west, I note it is possible to survey the entirety of Brighton and Hove, the city Michael made his home some 25 years ago. I comment on the view and he tells me of a dream he had “standing on the terrace edge and being taken away by two seagulls” this dream inspired his interest in writing fantasy, the predominant genre for his fascinating first novel. Knowing something of Michael’s life story already, I am surprised to learn his book is not about his own journey.

“I never wanted to write a book” he tells me. “Four years ago I fell into a deep clinical depression but initially didn’t recognise it as such. When I did, I felt that it was my dealing with world events and not coping with them. I made a list of concerns, religious doctrine, radicalisation, child abuse amongst many more and decided to write short stories on them. Eventually I thought there could be a book of this collection and began to put them in some sort of order. As a read them I thought to myself ‘you’ve started a novel’. They all were linked somehow. I had no conception, no plan. I started on the first went through each story and developed the themes. Once I added characters I felt as though my fingers were like magic. I finished one sentence on to the next and the story beginning to tell itself”.

Reviewed in the December edition of GScene, The Triple Goddess is a fantasy extravaganza that mixes magic, legend, love and humour into a utopian/dystopian future world. We are introduced to a seemingly ordinary world of cosy domestic bliss of boy meets boy and holidays in Italy when strange coincidences make profound changes to the lives of almost everyone else in the book. The plot explores sexual abuse, suffering, greed, religious extremists of all creeds and cruelty, but serves up retribution to protagonists offering salve and safety to the harmed. It is a page turner and tears through an ever nearing global apocalypse which plays compulsive background to the domestic developments of the chosen few.

Although the novel is not specifically about Michael’s life, his own life experience and view of the world have been a solid influence.

“I forget things in my life until I talk about them or read something I’ve written and then realise where it may have come from. I wanted to write about children in their honour and especially those who have suffered. Those who are suffering now terrible abuse but also in my youth I knew kids who had TB and were away from school, lives and friends for up to six months. And yet kids can change the world, they have the power. Look at the publicity Greta Thunberg has achieved in a short space of time. She has a shelf life though. Like all of us she is vulnerable to those in power. If they don’t destroy her one way they’ll do what they can to destroy her another”.

Book two of his trilogy is complete and he is busy working on the third. Michael has many fascinating stories of his own battles with those in power. He is quick to remind me that the decriminalisation of homosexuality in 1969 was ‘partial’: “people forget that” he says. “You were only allowed sex with a consenting partner over the age of 21 in the privacy of your own home and if you lived in a flat, that was not considered your own home as it was in a building shared by others”. He tells me stories of friends and friends of friends dragged out of their own flats by homophobic police officers who “behaved like thugs”. It was whilst visiting a friend’s flat in the early 1970s that Michael was arrested for importuning. “no one had a phone in those days. I turned up at my friends and he wasn’t in so I had to wait for him to come back. A well-dressed gentleman appeared and we struck up a conversation, two coppers jumped out from behind a bush and arrested me. It was a total set up. So many gay men were trapped in this way and we weren’t actually doing anything wrong”. The police witnesses in court lied and Michael was issued with a criminal conviction and fined ten pounds, equivalent to about £175 today. The sentence was sympathetic but Michael refused to pay “I was not guilty I don’t care what the police said in court”. Michael was returned to court and continuing to protest his innocence he was sent to Brixton prison for one week.

It was this experience which drove Michael’s commitment to the Gay Liberation Front (GLF). At the time the GLF were treated much as a subversive political movement in much the same way as a terrorist organisation. Suspected members were often followed and had files held by special branch police units. “We used to meet in empty warehouses in Covent Garden at all hours of the night, it was risky but we were determined”,

During a trip to Bangkok, Michael noted stories in local newspapers of five British men having committed suicide whilst visiting the city. During his stay he was asked to take a shipment of drugs back to the UK hidden in canteens of cutlery. When he refused, he was told that others would soon read of his suicide in the local press. Reluctantly he boarded a plane for London with packets of heroin hidden in his baggage. “I went straight to the ‘something to declare’ line at customs and told them what I was carrying and how it had come about. I was arrested and during questioning they brought up my GLF special branch file and previous convictions. In court there was no mention that I had offered up the drugs and self-declared”. Michael was found guilty and in 1976 sentenced to eight years, the first two of which were served in a high security prison on the Isle of Wight along with some of the country’s most dangerous prisoners. “There are many ways to survive prison” he says and over tea and cakes two days before Christmas, tells me about two of them.

“I have no fear” he says proudly. I’ve been in and out of STD clinics since 1959 dear, what’s the worst that can happen? We are a nation of thieves and pirates. We were always good at robbing resources from elsewhere in the world. I do love this country but the biggest criminals are the richest and the best educated people on this planet. They created these systems and know how to work their way around them whilst the rest of us are pushed around”.

It was upon his release from prison in 1982 that Michael first noticed a story in the gay press “in a column no bigger than a couple of postage stamps” about a ‘gay plague’. It is when I ask him what his greatest achievement in life has been so far he says:“not the words I would use, the thing that has given me the most spiritual satisfaction was volunteer work with body positive in the 1980s. Working with so very many beautiful gay men most of whom are dead. Seeing how their parents acted and reacted to the situation their children were in. To see how families became single minded and greedy. Families came in and threw partners out of their homes and claimed everything material. Seeing the best and worst of families. Seeing the whole spectrum. Seeing how friends through fear left their friends to die alone – they couldn’t bear to see what would in turn happen to them. And there was a tidal wave dumped on the gay community by the heterosexual press. It was horrific but those early men to me are saints”.

“They were not easy times, even without the arrival of AIDS and HIV. Gay pubs were run by straight landlords who hated us” Michael tells me of The Champion Pub in London where the landlord refused to serve a trans woman. The following week all the male members of the GLF in London went into the pub wearing dresses and refused to leave until they were served a drink. I ask Michael to share any remembered disappointments: “the misogyny of gay men. Gay men who refer to women as inferior. Young men too. This was the case in my youth, it is the same now. Let me tell you if it wasn’t for the lesbians within the gay community – we would not be here now. Not just everything they did in the AIDS crisis but as activists. I am proud to have stood side by side with these women in the 1970s.

Our first meeting ends with Michael sharing his excitement over his impending book launch at the LSE in London. “That’s where the GLF started. It’s like coming full circle. When I pop my clogs they will inherit all my writings and books whether they want them or not”

Once his Goddess trilogy is complete, he promises to write a memoir with these stories and so many more laid bare.

The Triple Goddess by Michael James is available now from all online retailers, published by Fantastic Books. www.fantasticbooks.com