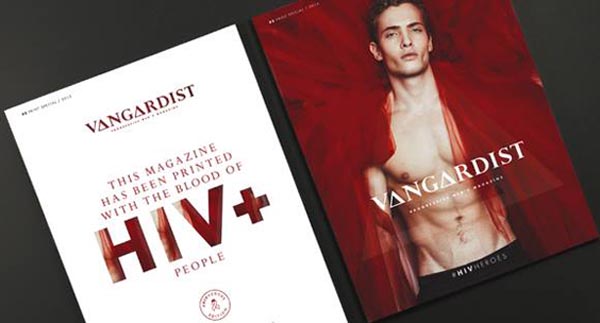 Progressive German men’s lifestyle mag Vangardist has printed it’s latest edition using HIV+ blood in a bid to ‘end the social stigma’ that is associated with the virus.

IN a new campaign headed by Saatchi & Saatchi Switzerland for Vangardist, the magazine – which is a leading men’s monthly in Germany – is, quite literally, putting the issue in it’s reader’s hands. For it’s Spring Edition, Vangardist has infused its printing ink with the sterilized blood of HIV positive donors in order to fight the stigma that is associated with HIV and AIDS.

The Executive Creative Director of Saatchi & Saatchi Switzerland, Jason Romeyko, said: “With this unique project, we want to create a response in a heartbeat by transforming the media into the very root of the stigma itself – by printing every word, line, picture and page of the magazine with the blood from HIV+ people. By holding the issue, readers are immediately breaking the taboo.”

The blood came from three donors: Wiltrud, a mother; Wyndham, a homosexual man; and Phillip, a heterosexual man. The blood was sterilized and then mixed into the printing press ink, which was then used for the 3,000 limited edition copies of the issue. A further 15,000 copies have been printed in basic ink without the addition of blood.

Julie Wiehl, Publisher and CEO of Vangardist said: “The editorial team at Vangardist is committed to dealing with a wide variety of topics affecting our readers. We believe that as a lifestyle magazine it is our responsibility to address the issues shaping society today.”

The special edition issue is part of an online social media campaign, aimed at breaking the stereotypes that are associated with HIV, and those that surround the people who live with it. #HIVHEROES seeks to break the stigma, and encourage people to make a statement and join the conversation about HIV & AIDS.

Despite 30 years of campaigning, HIV remains a relatively unspoken subject within society. The negative preconceptions that are associated with the virus are undoubtedly are one of the main obstacles that stand in the way of open communication and effective management. Vangardist believes that it is essential for conversations around this topic to be reignited.

The magazine is available to buy or read online via the Vangardist website, and it is also on sale in Austria, Germany, and Switzerland. Profits from this edition are being donated to HIV and AIDS focused charities.

To buy a copy of Vangardist magazine online, click here:

For more information on the campaign and to show your support, click here: