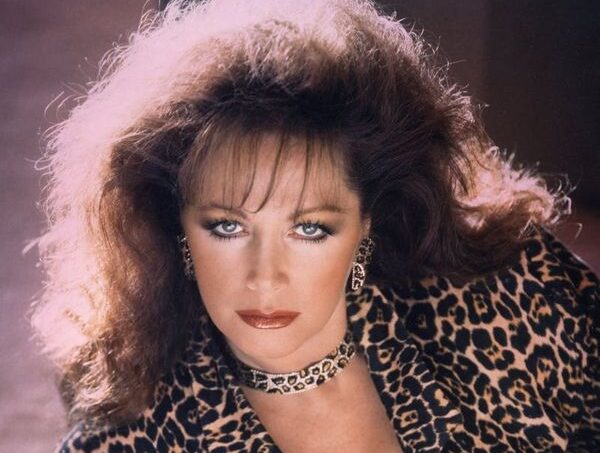 Jackie Collins is one of the most widely read authors in history. She chronicled the lives and loves of the Hollywood elite in her unmistakable style. Although she never quite won over the critics, she kept millions of readers entertained.

Laura Fairrie’s new documentary, Lady Boss: The Jackie Collins Story, recasts her as a feminist icon. The film takes a look behind the big hair, big money and shoulder pads to tell Jackie Collins’ own story. We caught up with Laura to find out more.

First of all, how did you discover Jackie Collins? “I discovered her as a teenager at school – her books were passed around. We’d read them during lessons hidden under our desks. She was my sex education, basically.”

How did she cultivate her camp persona? “She didn’t intend for it to be camp. For her it was about protecting herself and as the public persona grew, the “shield” became more extreme. The more knocks she had the more she used the image: the leopard print, the shoulder pads, the big hair; as armour. She often wore quite masculine suits and always trousers – you never saw her in a dress – it was her way of surviving in the man’s world she was in.”

So, for the uninitiated which Jackie Collins books would you recommend? “I’d recommend the first book, The World is Full of Married Men. It’s got so much of her early life in it. It’s shocking and it’s so ahead of its time. I love Hollywood Wives – it’s so much fun. That’s a great combo to start with. She would say Lovers & Gamblers was her best.”

She wrote 32 New York Times Best Sellers in her life. She wrote by hand and she wrote compulsively, and yet she never wrote her autobiography. “Reality was an uncomfortable place for her and she preferred the fantasy world of her books. She wanted to leave the difficult times she endured, the toxic relationships, the upsetting parts of her life in the past and focus on the future. Going back over those experiences and retracing her life didn’t come naturally to her, but what did come naturally was imagining the life she wanted and she escaped by writing about it.”

Pursuing a fantasy life is a risky move. Life isn’t really a fantasy, and yet Jackie Collins pursued her fantasy and succeeded. “She did for a while, she imagined the life she wanted for herself and she got it. Lucky Santangelo was one of her most popular characters and was really the woman Jackie wanted to be, and for a time she lived the life she dreamed of. She was powerful, untouchable, gorgeous, and completely financially independent.”

“But there’s another side to that and as she got older reality caught up with her and some hard blows came her way, and as they did she retreated further into the persona because it was a place where she felt strong.”

Jackie Collins became synonymous with lowbrow, trashy fiction. Did this frustrate her? “She was really hurt by that. She didn’t like to be dismissed as The Queen of Sleaze. Of course she knew she wasn’t Jane Austen; she didn’t pretend to be George Eliot. She nonetheless didn’t feel she got the credit she deserved. She made feminism available to women who maybe didn’t read anything else. She was hurt by the critics though – especially in Britain.”

Is it time for a critical reappraisal of her work? “Definitely. I think a lot of women have been bypassed or forgotten – she’s another example to add to the list. I love the idea of reevaluating her life and seeing her as a feminist icon. She was trailblazing in the books she wrote. She was a mogul too. She built a one woman empire from her books.”

Did she enjoy being rich, famous and fabulous? “Yes, definitely. In the film if you see her life in the 80s. She had a beautiful house in Beverly Hills, she had fabulous friends, she went to fabulous parties. She kept notes of everything she observed and spent the following day writing it up. She lived the dream. She was financially independent. It was the independence she achieved as a woman.”

Barbara Cartland was the original queen of romance, but she was no fan of Jackie Collins. They had a famous confrontation on a chat show in the 80s. “She said to Jackie Collins, ‘I think the books you write are evil.’ It reflects the battles Jackie Collins had to fight. It was an example of the kind of criticism she faced. To be called evil is pretty full on. It also shows that women have different ideas of what feminism is. I think what’s wonderful about Jackie is that she defines feminism for herself. It’s a lesson for all women: we don’t need to be told how to live our lives.”

For many, Jackie Collins became synonymous with sex. She was the queen of the “Bonkbuster,” but there was far more to her writing than the raunchy bits. “I think lots of women enjoyed her books – she wrote sex well. It was at the heart of what she did. But there’s also so much more to her writing. There’s really good storytelling, but for some reason people focused on that.”

What about her relationship with Joan Collins, her famous sister? “They loved each other deeply. They lived these extraordinary lives side by side, competition fueled them and in that way they were motivated by each other.”

Perhaps unsurprisingly, Jackie Collins developed a gay fanbase. “She had a huge gay following which she loved and embraced. In the 80s people would go dressed as Jackie Collins on Pride marches. She was known as the Charles Dickens of Beverly Hills. Guys would go out in the leopard print and the shoulder pads. There was an understanding of how she used her image as armour and the vulnerability that stood behind that.”

Lady Boss:The Jackie Collins Story is in cinemas across the UK to find out where visit www.modernfilms.com/ladyboss