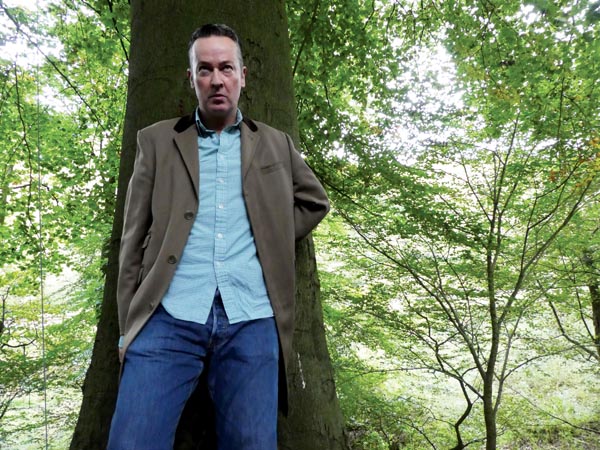 Your books are exquisitely crafted. What’s the reasoning behind this understated stylish presentation?

“A signed limited edition hardback has a personal touch. So many books are spat out at the press of a button, they feel disposable, tiresomely generic, invariably way too corporate, lacking heart. Readers want something tangible, the feel of print in their hands, a book with a spine, that smell. An artisan approach is suited to the writing, poetry that skids into prose – something to keep, deserving a space in the physical world.”

Poetry? Why?
“I left mainstream publishing to develop writing that is not deemed to have commercial potential. This focus is a way of developing material without worrying about the confines of plot, structure or the dictates of a prissy editor. My interest is upon taboo areas that some view as unpublishable. I’m drawn to ideas that many writers run from.”

Who do you read for the pure joy of it?
“I learned much from court transcripts, psychological case studies and the early fiction of writers such as Dennis Cooper. Cooper’s blog is an amazing online resource for those seeking all things ‘alt’. I loved the High Risk anthologies of the early 1990s, ‘forbidden writing’ edited by Ira Silverberg and Amy Scholder in the US. I’m currently enjoying Crush by Richard Siken and profiles within recon, grindr, scruff and fabswingers.com contain many a candid disclosure that I swoop upon.”

Which song stirs you to sing along?
“So High and Dear Jim by Zerocrop are two tracks I play to death, releasing albums for almost 20 years their music is a hypnotic mix of complex melodies and spoken word on unsettling themes, set against a rich backwash of dulcimer, pedal steel, guitars and electronics. He has such a seductive voice, I’m a fan. His tone of voice is phenomenal. Casey Spooner of Fischerspooner also hits the spot.”

What words of advice would you share with younger LGBT+ wordsmiths?
“Morrissey’s Sing Your Life could act as a motivational starting point. It encourages everybody to walk to the microphone and name the things they love, they loathe, not wishing to go through life with a tale untold. There’s a life lesson in its lyrics. So many queer themes are rarely explored. The stretched-to-f**k AYOR boundaries of chem sex, actively seeking to become pozzed up and the dynamics of intergenerational relationships are three areas of interest.”

Do you have a muse?
“I’m drawn to anonymous objects of desire, random moments that quicken the heart, snapshot sightings which raise the blood pressure, jigsaw moments. I see so many ‘characters’ on the commercialised scene, from rainbow-flagged bar to dank cellar f**k club. The reality of compulsive urban sex is often edited out, dumbed down in PC publishing.

“England is a country which suffered censorship that was absurd, crippling and pernicious.

“I’m an unremitting defender of artistic freedom and the next generation of LGBT+ writers need to go at it raw, refusing to work within confined establishment standards.

“A small number of major publishing houses dominate, with writers being uni-educated workshopped bores who produce proposal after proposal meeting all the tedious tick box requirements. Playing along with the media in-crowd has always been of zero interest. I’m drawn to agitate fine nerve endings, a mission I will not compromise. I believe in the hard punch, not the light touch. Forgive me if I rant, but I’m not the happy homosexual, spouting upbeat soundbites. I’m not the frothy scene queen, spewing on-trend gibberish.”

Tell us something about your grandmother?
“You’re kidding? Oh, you’re not. My father’s side of the family were a farming community from the Beara Peninsula, Cork. My mother’s side of the family were stage-directed by my somewhat OCD grandmother. My father came from a family of 12; my mother was one of five, a relatively small family, all in a two-roomed house. Both women had backbone and were incredibly liberal; believing that in terms of queer there’s invariably one in every family.”

What is courage in this age?
“A certain patience, perseverance and bravery is needed to confront the angst of an uncertain future. As a mentor, I encourage students to avoid a university education, the lure of digital is too much of a distraction and eyes need to look away from telephonic toys to process this overwhelming world we live in. Everything is a choice, from what we eat to a smoke of some synthetic shit, to the deep and meaningful scribble of an impulse tatt. It takes courage not to blend in with the herd.

“In an age when freedom of expression is under grave threat, if not from the State then from fear-engendered by social media pressure groups and religious intolerance, I will not dick around in the way that the so many long-serving bores do, homosexual heavyweights whose work feels better suited to the markets of another century. I relate more to American, European and the new wave of Japanese writers, who have an air of subversion. When I look at the Twitter accounts of award-winning writers, I’m repulsed by the selfies and self-promotional branding and blatant networking. Urgh upon urghs.”

Do you have a favourite word?

Where do you come from?
“I’m from turbulent decades, which so many of my peers did not survive. The scenes were fuelled by amphetamines, alcohol and self-absorbed narcissism. Fast-lane moths, straight to the flames. Then came capital letters E, G, hitting hard. The late 1970s were a time of exhibitionism, voyeurism… fetishists, on parade. Towards the end of the 1980s, Ecstasy created monsters of suburbanites at raves. Messed-up, loved-up smilers, heading for Casualty. I was there, documenting ever-evolving cycles of youth in transition as a photographer and writer. Dry-eyed, sober, drug-free.

“As both a writer and photographer, I’ve specialised in social trawling, with an eye upon innovative style tribes within non-conforming ‘alt’ scenes, especially those identifying as LGBTI. Since the age of 18, I’ve detected and tracked changes in the way brave souls both race and rage from the closet, motivated to express themselves. I document the ‘braille’, the bumps that protrude within an urban setting and clubland, style-fixated landscapes. From punks in bondage trousers to pups in rubber.

“Right now, so many within the fast f**k lane are entrusting their wellbeing to PrEP. Sexual compulsives tick the RATHER NOT SAY / NEVER option list on recon.com re safer sex. It’s that area of risk taking that interests me. I find profiles on sex-based sites to be of more interest than the latest hyped products from Alan Hollinghurst. Barebacking profiles rather than over-priced hardbacks There is a social backbone within my creative work that should be interpreted as a form of constructive activism. It is my hope that forthcoming published work will challenge, motivate and inspire.”

You’ve a new book out this month, what can excited followers of your work expect?

“A piece at the end – The User Experience – goes as far as I can on the mind-set and detrimental development of a Catholic priest named Yuuto. I use retractions as a stylistic device, self-censoring my own work. In my writing that so often has a focus upon the immoral and highly illegal, I work within the law.

“To use a tabloid term, SEX MONSTERS are rarely considered beyond the sensational storm that journalists descend upon after a string of victims. In many respects, that has been my mission since the publication of my first novel, Call Me, back in 1996, exposing uncomfortable truths.”

I Shouldn’t, Must Stop by PP Hartnett, is published by Autopsy costing £10.