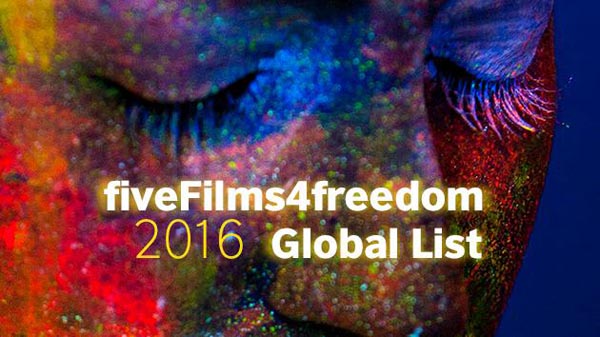 fiveFilms4freedom is the world’s first global, digital, LGBT campaign promoted through the British Council’s network in more than 60 countries and regions around the globe, reaching audiences across the Americas, China, India, Israel, Mexico, Ukraine and to the Far East.

For the second year fiveFilms4freedom have announced a list of global LGBT influencers. These 33 people are being recognised for their work to support and promote LGBT rights and equality around the world.

♦ Mahmoud Hassino, who started the first Syrian LGBT online magazine Mawaleh, and works at a Berlin-based refuge for LGBTI refugees.

♦ Bilge Tas, the director and co-founder of Pink Life QueerFest in Ankara, Turkey.

♦ Tiffany Kagure Mugo, co-founder and curator of HOLAA!, an online Pan Africanist Womanist hub that allows women to speak about their sexuality.

♦ HiaMyat Tun and Billy Stewart, the co-founders of &PROUD, the first LGBT film festival in Yangon, Myanmar. It was established to bring together the LGBT community in Myanmar and create greater awareness of issues facing LGBT communities across Asia.