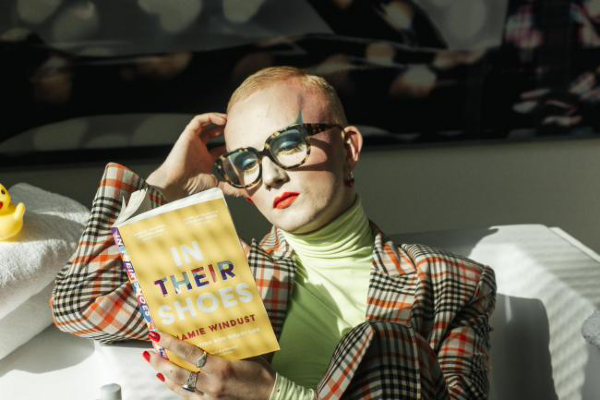 In this third look at this year’s  Brighton online queer literary festival, The Coast Is Queer, I sat in on Juno Dawson’s Trans Literary Salon , featuring  Jamie Windust – writer/ presenter/model  – author of In Their Shoes.

Jamie had always written , keeping a diary from a young age. “ These were things I’d  never spoken about . I was asked to write a guide for teenagers : I don’t think I was the person for that . I’m not an expert; I wanted to talk about my stories not how others should live their lives”, Jamie said.

About In Their Shoes Jamie said: “It’s not a memoir, or an autobiography. It’s about a passage of time from 13 – 21 that was very formative . I wrote for our community, a love-letter to my trans and non-binary siblings. There’s no room at the inn for non-binary people. Views are all black and white about trans men and women. We haven’t moved past the idea of being born in the wrong body.”

“The understanding of non-binary people is a million miles away in the media.” Jamie said that gender expression and gender identity are split in the book. “ Coming to terms with gender identity is different for everyone .”

Juno admits she didn’t meet many trans women when she first moved to Brighton ( She now lives in Worthing). “ It was through the internet I met other trans people “, she says.

Jamie confesses: “ I’m not a night-life person so I didn’t find my queerness there. I found it on social media rather than in a physical community”. When they were young they found a role model in actor/ comedian Julian Clary . Juno asked Jamie if they were  comfortable being a role model.

Jamie  replied: “If you are marginalised and get into the media, it’s easy to just fit into a slot and say yes to lots of basic sanitised things. I wouldn’t do those things ( tv appearances) now. I didn’t want to continually have to explain myself. I don’t regard myself as an activist. I politely reject the label – it’s too specific ; it’s doesn’t  allow me to breathe.”

“Trans people get blamed for the bigotry they experience – how they look/dress, their attitude – well what do you expect ? We are living  in desperately unkind years .”

Jamie recalled how at 15/16 they got a job in a local department store in Dorset. “ I was put on the menswear department, but every weekend I would go to the make-up counter . I would buy make-up and then wear it to work. I was told  to take it off by the manager. I genuinely didn’t care that I shocked people . It lit a fire in me not to change it ” They  were moved to the make-up counter !

“ The reaction to my presence was overwhelming – people being absolutely vile to me . You’re happy but people make you doubt .”

Jamie said that the only “ real trickle of romance “ was with a fellow non-binary person. Revealingly Jamie added that “ you’re either a sex object or unlovable . Dating is very difficult for trans people – lots just can’t do it “.

The streamed conversation contains another revelation – both Juno and Jamie have experienced the trauma of assault .

And  on a lighter note, they both agree that people’s curiosity about what it is to be trans or non-binary is easily answered : Google it.

Check Scene online and The Coast is Queer , Marlborough Productions and  New Writing South to see when their festival conversations  come online.