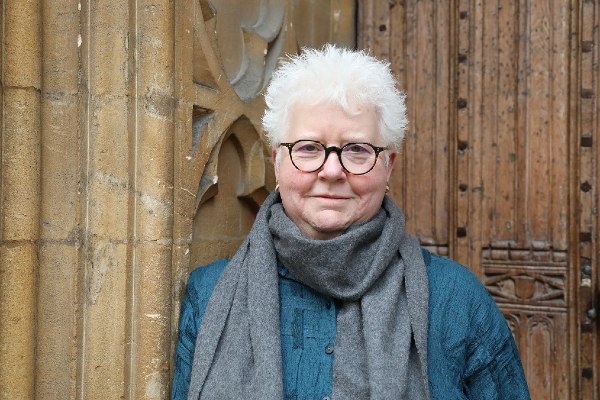 Val McDermid has been dubbed the Queen of “ Tartan noir “ with her many series of crime novels, breaking ground as she did with Lindsay Gordon, the first openly-lesbian detective some 20 years ago.

In this conversation with writer Rosie Garland for Brighton’s The Coast is Queer literary weekend online, she reveals  how she works, why she writes the way she does and gives  aspiring writers some very good pointers to help them develop.

The conversation is definitely an inspiring  insight into the creative process of this prolific writer, who’s sold 17 million books.

Val traces her interest back to a visit to the play The Changeling at Dundee Rep when she was 13/14. A character cut the finger off someone else’s hand and displayed it. “ It was electrifying. It showed the power of language and drama- what you could do with words,” she tells us.

Aged 9 she had already formed the idea of being a writer – what would she now tell that young girl? “ It’s going to get better; be patient and persistent. It’s not going to be an overnight thing. Attempt and failure is ok ,” admitting it took her 12 years to get one book to come out right.

Her second tip is not to think you know  best about your own work. “ The value of a good editor is priceless – you’re not the ultimate arbiter of your novel. “ Authenticity and believability are also key , she tells Rosie but she admits candidly: “ I don’t think much  about the reader when I’m writing . I write the book I would like to read. The last thing I should do is censor myself.”

She also admitted she had 2 “failed novels” squirrelled away which her partner Jo has been sworn to destroy on her death. “ The first is about a  tortured lesbian relationship , written at a time when a lesbian novel couldn’t have a happy ending .” She then re-wrote it as a play and it was performed in Plymouth and on Radio Scotland . “ It was full of lesbian guilt, love and pain .” Bizarrely on the  back of it Val was commissioned to write a science fiction  childrens’ panto !

After 2 or 3 years of bad plays, her agent fired her : “ I thought I must be really crap ! ” but it kickstarted her into writing crime  novels , which she had loved since at age 8 or 9 she had read Agatha Christie’s Murder At The Vicarage- the first Miss  Marple book.

“ I learned that you need a dead body, a detective ; one suspect, lots of suspects or none and a conclusion” she says smiling. “ I can’t write English village mysteries : I grew up in a Scottish mining community. .” Asked what were the hardest bits to  write, she’s quick off the mark: “ Not the emotional scenes  – it’s the complicated physical scenes where things have to happen in the right order. I’m notorious  for getting the continuity wrong .”

In lockdown she admits to writing more slowly and producing fewer words each day. Her latest Still Life is set in 2020 – just as lockdown started but she hasn’t used hindsight to update it. Apart from that, she’s busied herself with virtual festivals and  a short story. She’s writing a play for the Edinburgh Lyceum and is involved  in the filming of a Karen Pirie story. You can read more on Val’s website

“I can’t write about the here and now as everything is changing day to day . I have to be on solid ground, ”  she says,  so she’s embarked on a sequence of novels from 1979-2019 as a quintet  with the same protagonist  .

Watch this space but one thing is sure – the queen of crime writing will make it as gripping as ever.

Look out for Val’s conversation and other Coast Is Queer events on the web shortly . Scene will update you. Next time  we get tips from queer filmmaker Campbell X .

The Coast Is Queer is a collaboration between New Writing  South and Marlborough Productions. Check out their sites.