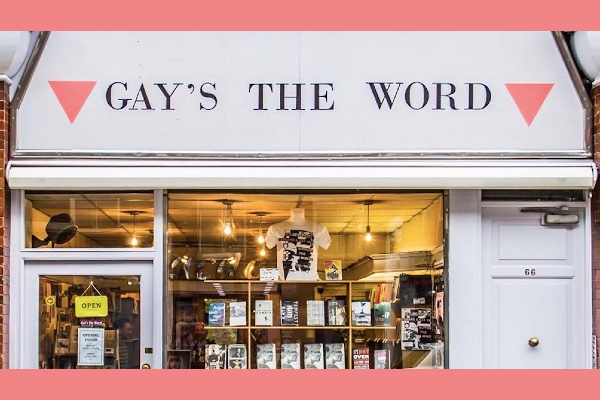 The first is a blue plaque to mark the home of troubled and closeted gay comedian Kenneth Williams. And a few doors away across the street is an iconic bookshop and meeting place that for 40 years has been central to LGBTQ+ politics and culture in the UK.

Leading the shop team is Jim MacSweeney, who’s been here since 1989, 10 years after the shop’s original controversial opening. He takes me down a steep staircase into the hallowed basement whose corridor is lined with the overspill shelves from upstairs.

” When we started, London was very different – gay bars had blacked-out windows. We had to fit shutters at night, which attracted graffiti. We had an escape route to get out quick at the back of the shop if necessary” says  Jim.

” This was never a gay area as such – we came here because the rents were cheap. Other bookshops came and went and we ended up as the last to stay open. Many other outlets- like Waterstones – now have LGBTQ+ sections . We survived because of our history, because our staff are so knowledgeable and because there’s no sense of judgement here on what people buy from our fantastic range.

” It’s about curation, knowledge and passion – not about how many units we can sell. There’s a joy in introducing people to new titles – sales often result from conversations with the staff. We get 16 to 90 year-olds – some are nervous, some overwhelmed, some relaxed when they first come in – there’s no wrong book to choose. “

Jim came to London from Ireland originally to pursue acting but quickly moved into the book trade , which his family were already in. “ At 22 I came to England and came out – “ I could be my own genuine self here -Ireland  in the 70’s was like Britain in the 50’s – my God it’s changed ; I’m so proud and moved that a new generation in Ireland  are free and out.”

In 1984 the shop was famously raided – not by the police but by Customs and Excise , who’d been watching books arrive at the shop from the USA. It wasn’t a prosecution under the Obscene Publications legislation but the rather more esoteric Customs Consolidation  Act.  Three directors of the company had their homes raided and criminal charges were brought.

” The community were outraged and support was galvanised. There were question in Parliament. “ It took two and a half years to get the charges dropped . The shop was a major supporter through LGBTQ+ groups of the miners’ strike – meetings were held outside the front of the shop and the link was immortalised in the feature film Pride.

Section 28 was another major campaigning focus. “ We sell books on sex- and celebrate that but it’s not what we’re about. Nowadays parents come in to buy books for their children.  That’s a great step forward. People are coming in since lockdown and buying more.

” We’re rebuilding our website  And will be selling books directly though it soon , and our discussion groups are virtual for the moment. We were able to furlough the staff and we got a grant, but it’s wonderful being back. We use social media a lot and people have been very supportive; there’s a depth of feeling and affection among our customers.” Jim says.

Jim also admits that during lockdown he lost the ability to read . “ I get very involved in characters in stories and found it too stressful to read. I expected this to be over by July, but I try to remain optimistic . I love the bookshop and I love the people I meet. It’s all about books, about people , about community. They are my people in all their glorious variety.”he says and smiles broadly.

For the final word I turned to queer writer, actor, director Neil Bartlett for his assessment of Gay’s The Word.

He told  me: “ It’s hard to underestimate the value of Gay’s The Word. Try to imagine life without it – because I think that might be the best way of trying to calculate what it really means to all of us. Think of all the books  that you might never have been able to find and be enriched by; think  of all the welcoming conversations you would never have had; think of not being able to say to your neighbour whose teenage child has just come out to them” why don’t you take them on a trip to Gay’s The Word- you’d both find so much there to encourage and inspire you.

” Think about not having this marvellous living proof that no matter how much shit this country heaped on its LGBTQ+ citizens, we were able to win through and flourish and build our culture . This shop has been at the heart of my sense of myself as a gay man for all of my adult life. I love every brick and shelf of it. “

You can check out their new website now and tell everyone you know they’re open!