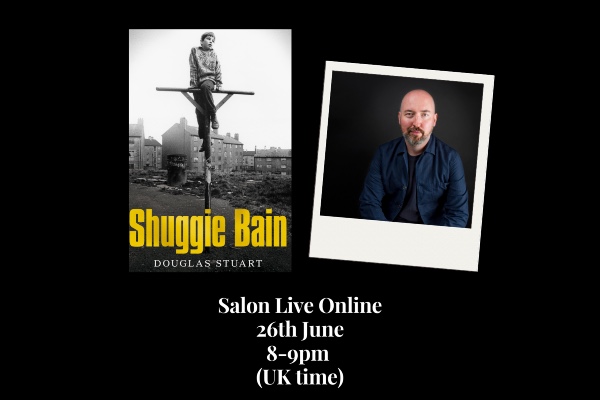 Douglas is making waves at the moment – his first ever short story was published in The New Yorker in January, he’s been named one of the Observer’s ‘best debut novelists of 2020’, Elle and Vogue have listed him as one of the best books of the year, and USA Today have named his as one of the top ten authors to read during Pride month.

Shuggie Bain is the first novel from Douglas, who was born and raised in Glasgow. The book is the story of a little boy growing up in 1980s Glasgow whose world is Agnes, his glamorous, calamitous mother, drinking herself ever so slowly to death. Shuggie tries to save her and find himself in a city that’s both bleak and dazzling. It’s the world Damian Barr grew up in and wrote about in his bestselling memoir Maggie & Me, but here it’s brought to life in fiction, albeit it partly autobiographical.

The New York Times said: ‘The book would be just about unbearable were it not for the author’s astonishing capacity for love. He’s lovely, Douglas Stuart, fierce and loving and lovely. He shows us lots of monstrous behaviour, but not a single monster―only damage. If he has a sharp eye for brokenness, he is even keener on the inextinguishable flicker of love that remains.’

Join Douglas Stuart and Damian Barr for an intimate and exclusive conversation online via Zoom webinar on Friday, June 26 from 8pm. Tickets are £5 (plus booking fee). To purchase, visit this website