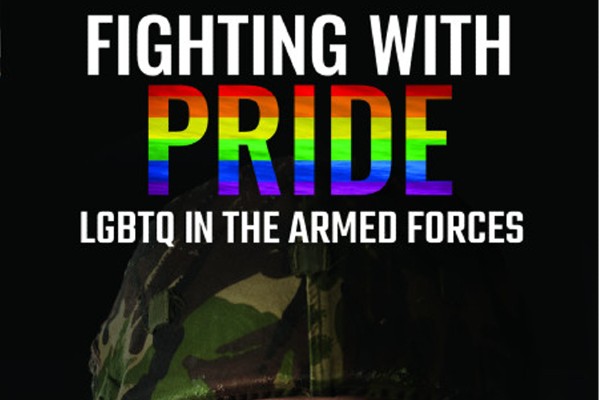 Fighting with Pride LGBT in the Armed Forces

Craig Jones is marking the 20th anniversary of the lifting of the British Armed Forces gay ban by bringing this anthology of personal testimonies. LGBTQ people from all three branches of the armed forces speak with candid honestly not just about their time serving in Her Majesty’s armed forces but also how their sexuality or gender identity coloured their experience.   For many joining up was an ambition from very young, family tradition or a need to be part of a wider organisation.  We hear, from the people who were there, fighting and working, stories from the front line from men and women who served in the Second World War, the Falklands War, the Gulf Wars and the war in Afghanistan.

Fighting for freedoms that were denied to them as people.   We also hear how some of the biggest battels they fought were with their employers; the armed forces, for recognition, dignity and fair equal treatment. This battle took place in every court in the UK and Europe.  It took place in bars, clubs and bedrooms, in newspapers and court martials.  The Armed Forces fighting inclusion each step of the way. A titanic struggle against institutional homophobia explained in clear, understandable ways by the people who demanded they be recognised. This is not just an important book, but it’s an interesting book and Jones should be congratulated for bringing these stories out into the world so we can understand how it is to be LGBTQ in the services, how hard it used to be and where the struggles still are.

This is a book about dogged indefatigable hope and how some of the best trained people in the county used that training to fight the Ministry of Defence for equality.