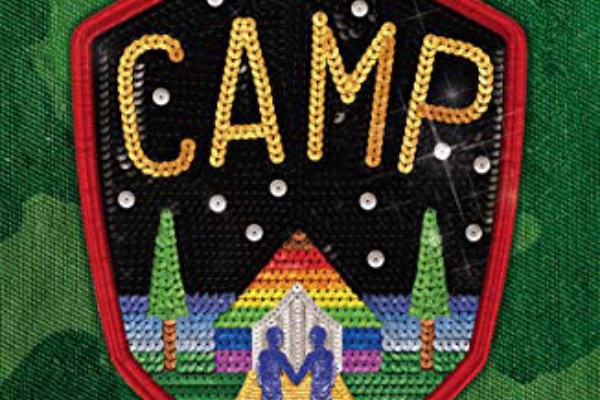 This is a super sweet LGBTQ romantic comedy from Rosen, written with real joy. It follows the reinvention of sixteen-year-old Randy Kapplehoff who’s got his heart set on bagging the Hot Boy at Summer Camp.  The summer camps which most American kids attend for a few weeks each year.  Like a cross between Butlins and the Guides, it’s all wholesome fun away from the family and with your peers.

Randy loves spending the summer at Camp Outland, a camp for queer teens. It’s where he met his best friends. It’s where he takes to the stage in the big musical. And it’s where he fell for Hudson – who’s only into straight-acting guys and barely knows theatrical Randy even exists. This year, though, it’s going to be different. Randy has reinvented himself as ‘Del’ – buff, masculine, stuffed with attitude and tight shorts and on the market.

Even if it means giving up show tunes, nail polish and his unicorn bedsheets, he’s determined to get Hudson to fall for him, as the book progresses we learn exactly what it’s going to cost Randy, and Hudson to be authentic in a world which wants them to be otherwise.

Rosen knows how to keep the narrative tension bouncing along and he gives good drama, we get a great glimpse into the plans and dreams of these engaging characters and feel for them, both in what they want and why they think it’s important for them.  Both main protagonists are fully rounded with their own fears, motivations and reflections on being Queer and what it costs them to be true to themselves.  It’s not all rosy going and Rosen deals with homophobic attitudes and societally expectations in a freindly subtle way. With some cute supporting characters this is young persons feel-good writing at it’s best, and it’s got some decent and honestly portrayed early sexual experiences in it, along with the worries that go with them.   Its so lovely to read a decent romance that’s handled with a sense of humour in a sensible way and a refusal to be anything other than 100% queer.

Great fun and left me with a warm smile.

L.C.Rosen is the author of the equality good Jack of Hearts which came out last year. More info here