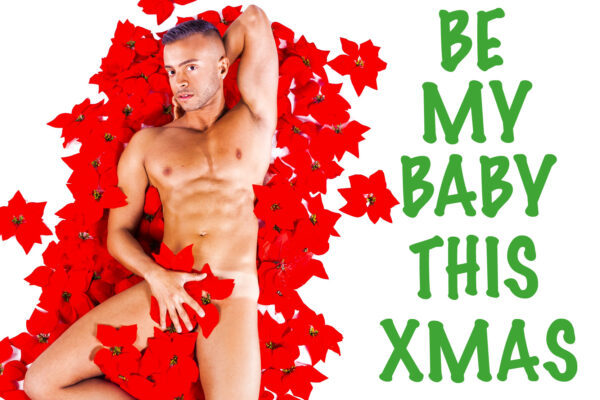 Rhian! loves Christmas! In December Scene magazine, we get cosy with the pop star – and our cover star! – to talk about the festive season and his Motown-inspired new single, Be My Baby This Christmas.

You moved from Trinidad to London. What inspired the move? Hey, I’m Rhian! and that’s with an exclamation mark for effect. Let me take a breath before I answer this question. I moved to London from Trinidad when I was younger, shortly after being outed to my parents by someone from my dad’s church. I lived in the UK for six years.

I moved back to Trinidad for a minute then lived in Shanghai for a number of years. Then it was back to Trinidad for a couple of months before spending the first half of 2020 in New York and then finally coming back to London. It’s been quite a journey and story up to this point in my life and the story is far from being over.

Who are your musical inspirations? Growing up, my idols were Mariah Carey, Michael Jackson and Whitney Houston. The greats!

How would you describe your sound? My sound is very eclectic. I’ve lived in so many places and experienced different cultures and sounds that have inspired my sound. My songs all can be placed in multiple genres but it’s my voice and arrangement/producing style that brings it all together and makes it cohesive.

What does Christmas mean to you? I really, really love Christmas. From the Christmas story to the commercial side of things with the lights and all things sparkly and festive. It’s a time of giving, putting differences aside and coming together. This Christmas I’ll be spending it with friends (my extended family) doing lots of festive things.

What inspired your new track Be My Baby This Christmas? In case you didn’t realise, I love Christmas and because I love Christmas so much, I wanted to create something that had a timeless feel to it. It’s upbeat and fun but it also touches on that yearning and longing for love. A lot of people are alone at Christmas time, so I wanted to acknowledge that. I was very inspired by the Motown sound of the ‘60s and the Christmas albums of that era.

What’s your favourite Christmas song of all time? You can’t ask me that. It’s too hard to choose… but if I’m going to go with a traditional one, it’ll be O Holy Night – Mariah’s version.

What do you have planned for 2023 – anything exciting in the pipeline? I have so many things that I want to achieve in 2023. I would love to perform at all of the Prides in UK next year. I’ll be releasing my debut EP The Real Rhian! Volume 1 in the spring. You can expect a lot of new music from me next year and I can’t wait to share it with everyone.