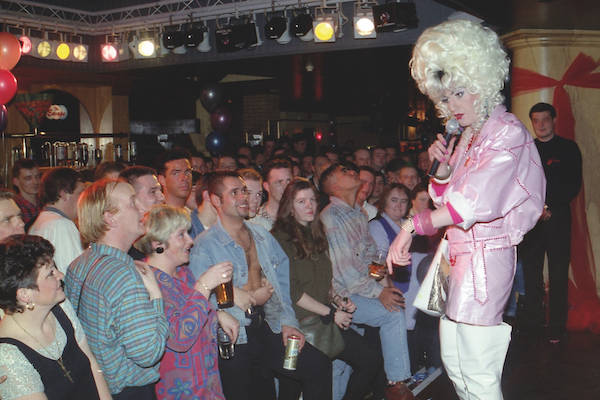 Stuart Linden Rhodes was a teacher in the ’90s. By night he accidentally became a chronicler of northern England’s gay nightlife. His photos capture long-lost gay bars and clubs.

Before he began to share them on Instagram (@linden_archives), the photos hadn’t been seen in decades. His Instagram account became a hit and the photos have now been gathered together in Out And About With Linden, a limited-edition photography book.

What inspired you to put the book together? “I put all these pictures up on Instagram, thinking a few people might like them, but that turned into thousands. People were asking me if there’d be a book. I was interviewed by Joseph Ingham in Vice magazine and I mentioned the book idea to him. He said ‘I’ll help you.’ So here we are, we ended up with a book.

“My day job was teaching. Photography was just a hobby. The first time I did photography for a magazine was in 1989. There was a free magazine in Manchester called Scene Out. They had a ludicrous competition: the prize was a free ride on the Orient Express. Everyone was like yeah, right. The competition was to take photographs and write a review of the gay scene where you lived. So I wrote a little review of Harrogate’s scene.”

Was there a gay scene in Harrogate in 1989? “If you can call Hales Bar a gay scene then yes, kind of. Of course it didn’t win but I was a runner-up. It just coincided with another friend of mine in Leeds who’d started a gay magazine called All Points North. He asked me to be their scene reviewer and photographer. I thought OK, free nights out! And that’s how it started. I got myself a decent camera and I was away.”

“The gay scene began to change in around 1993-94. It went from small bars and clubs to big venues that held a thousand people. In the ’80s most gay bars were run down. They were underfunded by the breweries, but the breweries started to take an interest in the pink pound. You had entrepreneurs like Terry George in Leeds putting on big events. It all took off. You realised that you were in the middle of something.”

“My section in All Points North was called Out And About With Linden. I would go to as many bars as I could and then write a review of the scenes in different cities. Where do the leather queens and all the other subculture groups go? People were reading it and choosing whether they wanted to go to Birmingham for a weekend. It was almost like a holiday brochure. We were inspiring gay tourism.”

Where were the most happening places? “Number one was always Manchester – it still is. When I first went there were just two or three bars, The Goose, Napoleons, Rembrandts. All of a sudden all these other bars opened like Mantos on Canal Street and New York New York. Birmingham was a close second, but no other city quite managed to have a village like Canal Street.”

The photos would indicate that you were a disco dolly. “I tried to be invisible, I am not a disco dolly by any means! I was a voyeur. There are two types of photographs in the book. There are group photos where people are posing and looking at the camera, but my favourite ones are the candid shots.”

“The ones that capture those moments of people on the dancefloor, living their best lives. I’d then go up to them afterwards and ask if I could use the photo in Gay Times or All Points North.” The only ‘no’ he received was from an angry bouncer in Manchester. Everyone else was more than happy to have their moment captured.

Stuart’s photos anticipate the rise of social media. Now everyone is taking photos of their nights out. No night out is ephemeral these days, but in the ’90s they were – unless someone like Stuart was there recording. He captured moments that would have disappeared otherwise.

“People contacted me through Instagram having found their past lives in the photos. Sometimes they’re saying ‘look at my hair, what was I thinking?’ But you also get sad comments about people who’ve passed away.”

How does it feel when you look back at those photos now? “It feels like another life. It’s a time I look back at with great fondness. I won’t say I get emotional but it evokes a lot of memories of that decade. I surprise myself actually. Sometimes I think that was a good photo, did I really take that?”