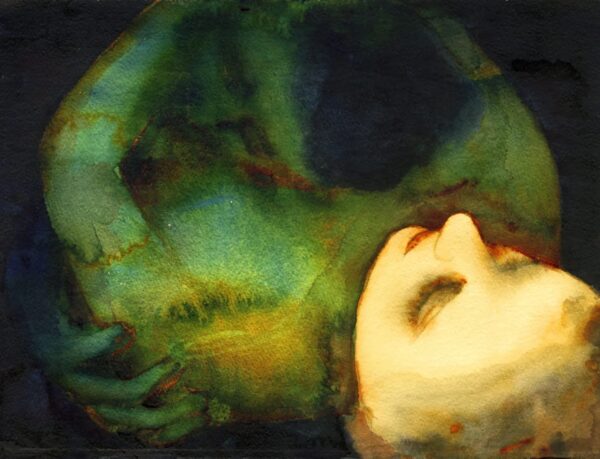 This month I am going to be introducing you to the work of an artist who is both based in Brighton and in the countryside of Umbria, Italy. A painter who utilises watercolour to create imagery whose painterly ability is equally matched by the presence exerted by the resulting scene dried into the paper. Graham Dean was born in 1951 in Merseyside, and having moved to London he worked as a freelancer illustrating book jackets, until he joined a gallery which enabled him to become a full-time painter. He was initially inspired by Richard Hamilton, over the years when he changed his style other people and influences became important, ranging from Emil Nolde, the frescoes in Pompei, Francis Bacon, Rodin’s watercolours and Degas’ experimental prints.

His early Urban Realism altered as all things must during the ’80s and the shift to watercolour, led him to the loss of many collectors, critics and supporters. He has since then focused on a larger scale of painting in a technique where he assembles, making each single sheet of the image separately to then glue them together to form the final artwork.

The body is a powerful image and terrain to explore via snapshots of human existence, transparently building up within the paper till they come to life. The unclothed body seen in all its moods and attitudes, cropped heads signifying all the emotions that would pulse through their unseen bodies. He transmits an essential part of the emotions and psychological states of these characters whether they may be beautiful models, athletes, crazy bondage enthusiasts, identical twins, people with skin imperfections, each a responsive vehicle seeping with expression.

His characters are the receptacles of a wide span of emotions, ideas, and memories. They are witnesses of the human condition and our ever complex relationship with the world. Graham’s painting is an investigation between the inside and the outside, the surface and what lingers beneath. Arms, faces, torsos, legs becoming interchangeable, anonymous but recognisable in the same instance. The body becoming a canvas, torn and stretched, a vehicle for the unfurling imagination of the artist.

The luminosity and depth that he is able to paint into being, an endless continuous examination of our human and emotive forms. He loves conjuring up these oddball characters, recomposing them in his preferred form of creative alchemy, mixing people, body parts and time itself. Although the subject of the works are representational, they manage to escape the illustrational qualities they could deviate towards, to instead reach a universal form which has a more deeply personal presence.

Having exhibited at the Basle Art Fair, Austin Desmond Fine Art, Waterhouse & Dodd and the Jill George Gallery in London, and Cameron Contemporary in Hove. He has works in the collections of the V&A Museum, the Contemporary Arts Society, Glasgow Museum of Modern Art, the ING Art Collection in Amsterdam, the National Gallery of Jamaica, the Royal Bank of Scotland and the Qingdao Art Museum, China.